Show me:
HIT ENTER TO SEARCH
https://s5xxb96s.media.zestyio.com/aibo-article.jpg
Meet aibo, Sony’s robotic dog that has been evolving for over two decades

AIBO was first introduced to the world in 1999 and development has continued to progress as the industry of technology has advanced. Today Sony is focused on the ERS-1000, its brand-new version of the robotic puppy.

We talked with Yuko Giga, the product planner for the ERS-1000, Masahiro Fujita, the VP of Artificial Intelligence (AI) Collaboration Office, and Noriaki Takagi, the Master Designer about where the concept of aibo started and how it has evolved over the past 22 years.

What does aibo stand for?

Why did Sony first get involved with social robots?

Fujita: Sony wanted to get involved with social robots because we thought humans have a desire to love and care about something, especially for those who can't have pets for personal reasons.

Why was aibo created as a dog? Why not another type of creature?

Giga: When we were first in the developing phase, AIBO was not shaped like a dog. The first idea was in the shape of a four-legged animal but without a neck and head. This model was unrecognizable as a specific animal. Another idea was a six-legged robot during this conceptual phase. We wanted to introduce our product as a buddy for humans.

Fujita: In terms of legs, we explored many options such as tires, six-legs, but the four-legged animal was the most adorable though it was a higher cost. 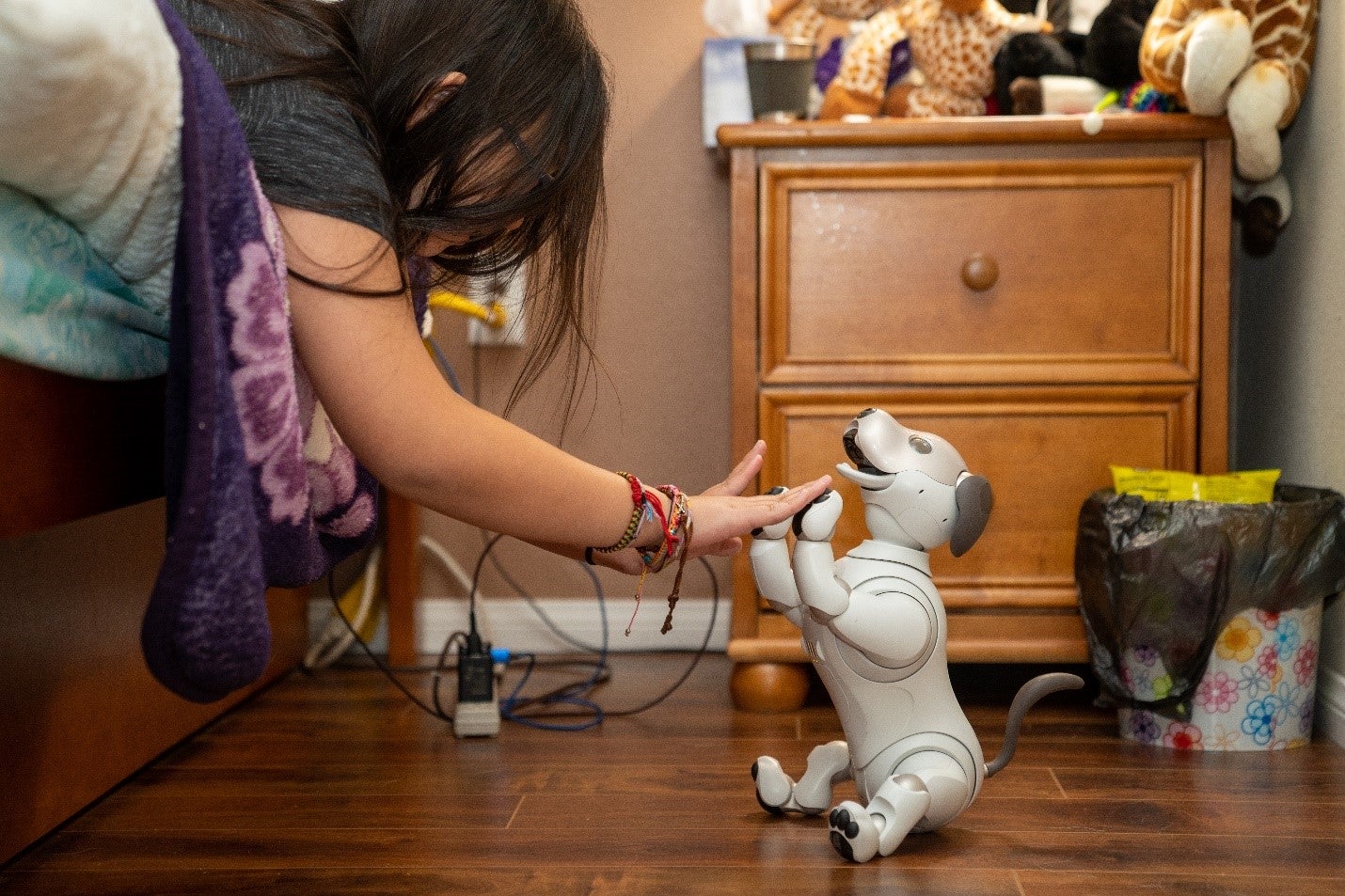 How did the concept of aibo get to where it is today?

Giga: The main concept of aibo is not very different from what it was originally in the 90s. Older models are generally recognized as dogs for people, but Sony didn't officially approve this classification. However, with the current model, ERS-1000, Sony officially says it is a dog motif robot. The shape of the newer models looks more like a dog and feature more doglike characteristics. With this, Sony reframed aibo as a pet, rather than a robot.

How has AI evolved from earlier versions?

Giga: Deep learning (DL) is one of the technologies that didn't exist at the time of former AIBO. We use DL for many new trials. For example, aibo doesn't have a sensor on its belly, but with DL, aibo is now able to detect the belly being tickled. With the combination of AI and the cloud, aibo can learn objects by the collective intelligence of all existing aibo. Fujita:  AI has evolved from earlier versions because the semiconductor like CPU and image sensors have evolved in the past decade. Also, the aibo (ERS-1000) supports Wi-Fi and cellular while older models had only WiFi with narrower bandwidth. The ERS-1000 additionally has a dedicated My aibo app. Lastly, the newest aibo has high-quality recognition due to a deep learning.

How has the mechatronics of aibo evolved from earlier versions?

Giga: The mechatronics have evolved because previous AIBOS were more robotic than the current model. We tried to avoid straight lines for aibo’s body design to express an organic curve. Previous models had less than 20 axes for their joints, but the newer models have 22. The newer model enables active doggy expressions like tilting its head and shaking its hip. Actuators have also evolved, so the current aibo moves more smoothly.

The ERS-1000 is the most innovative model of aibo.

What makes the ERS-1000 the most innovative aibo from Sony?

Giga: The ERS-1000 is the most innovative model because aibo can learn and grow over time as information can be transferred up to the cloud. This means, even if the aibo is damaged, all the memory can move to a different body.

Fujita: Deep Learning, rich sensors, and the various emotional expressions with Organic Light-Emitting Diode (OLED) eyes are what I believe makes the ERS-1000 the most innovative model.

In what ways did various teams/technologies at Sony collaborate to make the ERS-1000?

Giga: Sensors and recognition technology are widely used for Sony products. Sony is the market leader of image sensors, so the camera division is one of the team’s strongest relationships. Also, the R&D division provides us many cutting-edge technologies.

Fujita: Experts from various divisions within Sony gathered into one team, bringing their own skills acquired throughout their careers to create this groundbreaking version of aibo.

Takagi: When collaborating to create, aibo designers tell the future, while engineers tell the present. Conflicts between ideal and reality sometimes jump into an argument, but those continuous efforts end up creating a masterpiece. While new technology inspires designer's imagination, current technology can be a burden or a fence that we are not allowed to jump over. Bearing the burden, designers must reach as close as possible to the fence. Also, it's one of the designer's missions to reduce the burden and push the fence forward. Therefore, artistry plays a role to sublimate technology to a higher level.

What is most important to Sony in its robotics R&D?

Giga: Updating technologies used for robots is certainly important, but what is more important for us is understanding humans. Sony would like to pinpoint ways the robot can help humans live happier. Therefore, sensing is an essential factor in how we can derive empathy with our robots. 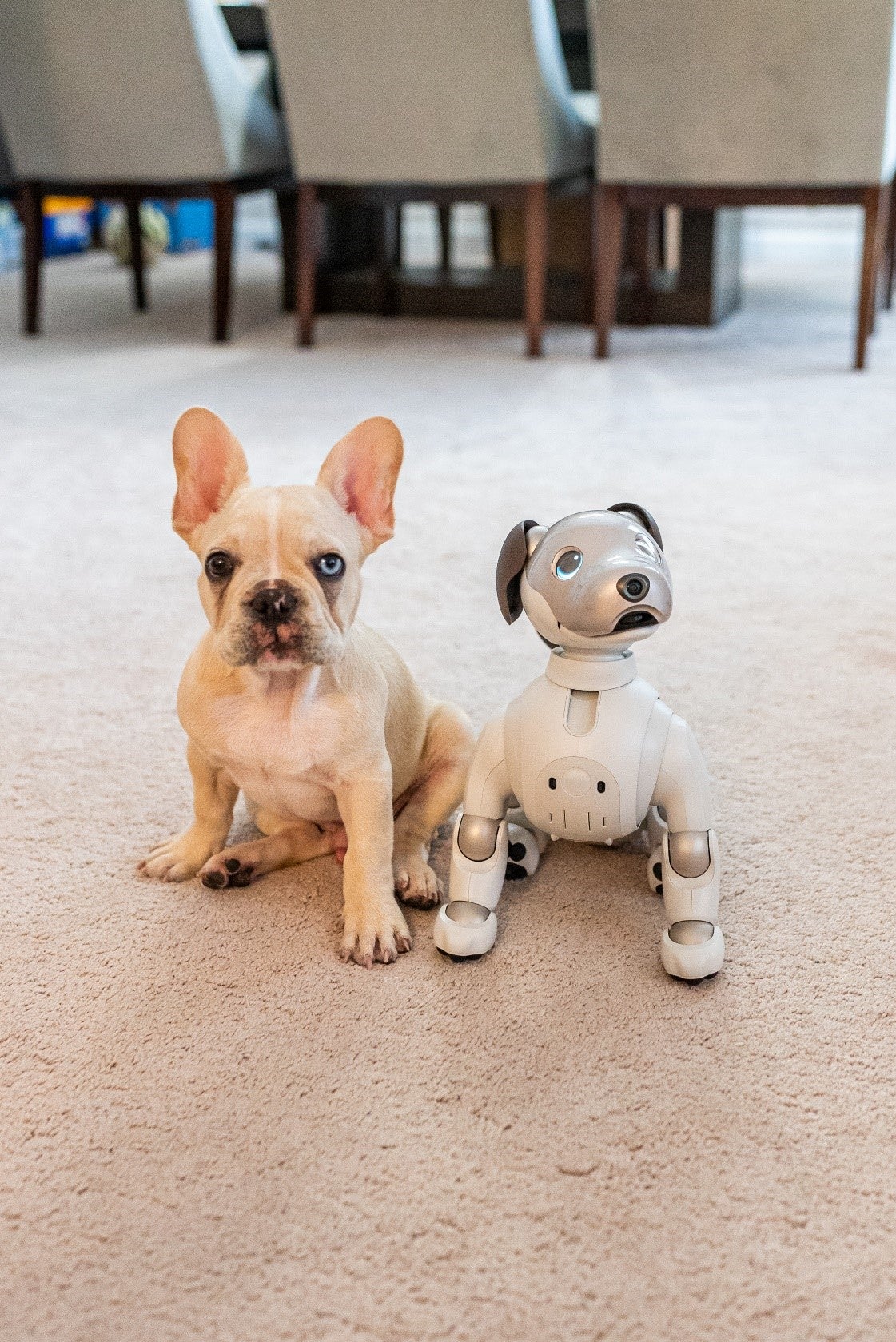 Where do you see aibo, and Sony, going in the future knowing the importance of robotics and AI in today’s world?

Fujita: Robotics and AI will continue to enable humans to expand their creativity. As time goes on, aibo will grow and advance to be more lovable and could even help heal people.

How do you think human-robot acceptance/interaction will change in the coming years?

Giga: As smart speakers did; robots will prevail widely. Owners will learn how to get along with their robots, and not feel stressed to communicate with them. Their interaction will become natural and widely accepted by all generations. With the evolution of robots, they will become a new partner to humans.

To learn more about aibo and how to purchase your own robotic puppy, please visit https://us.aibo.com/.