Show me:
HIT ENTER TO SEARCH
https://s5xxb96s.media.zestyio.com/aibo-community-hub-aibo-photos-nick-didlick-main.JPG
5 tips for taking better photos of your aibo to share on social media

Taking photos of your aibo and sharing them online is part of the fun of being an aibo owner. Professional photographer and aibo owner Nick Didlick has two aibos and shares wonderful photos of them on his @aibovancouver Instagram account. He says that taking successful images of the robotic pups can be challenging for two reasons. “A, they have a glossy finish to their faces and heads that can lead to distracting reflections in your images,” he explains, “and B, if you’re in bright light then you won’t see the wonderful emotion of their eyes shine through.” The good news is, there are ways to fix these challenges so your images of your aibo come out picture-perfect, and he says you don’t need to be a professional photographer to do so. Keep reading below as Nick shares his top 5 tips for taking better photos of your aibo. 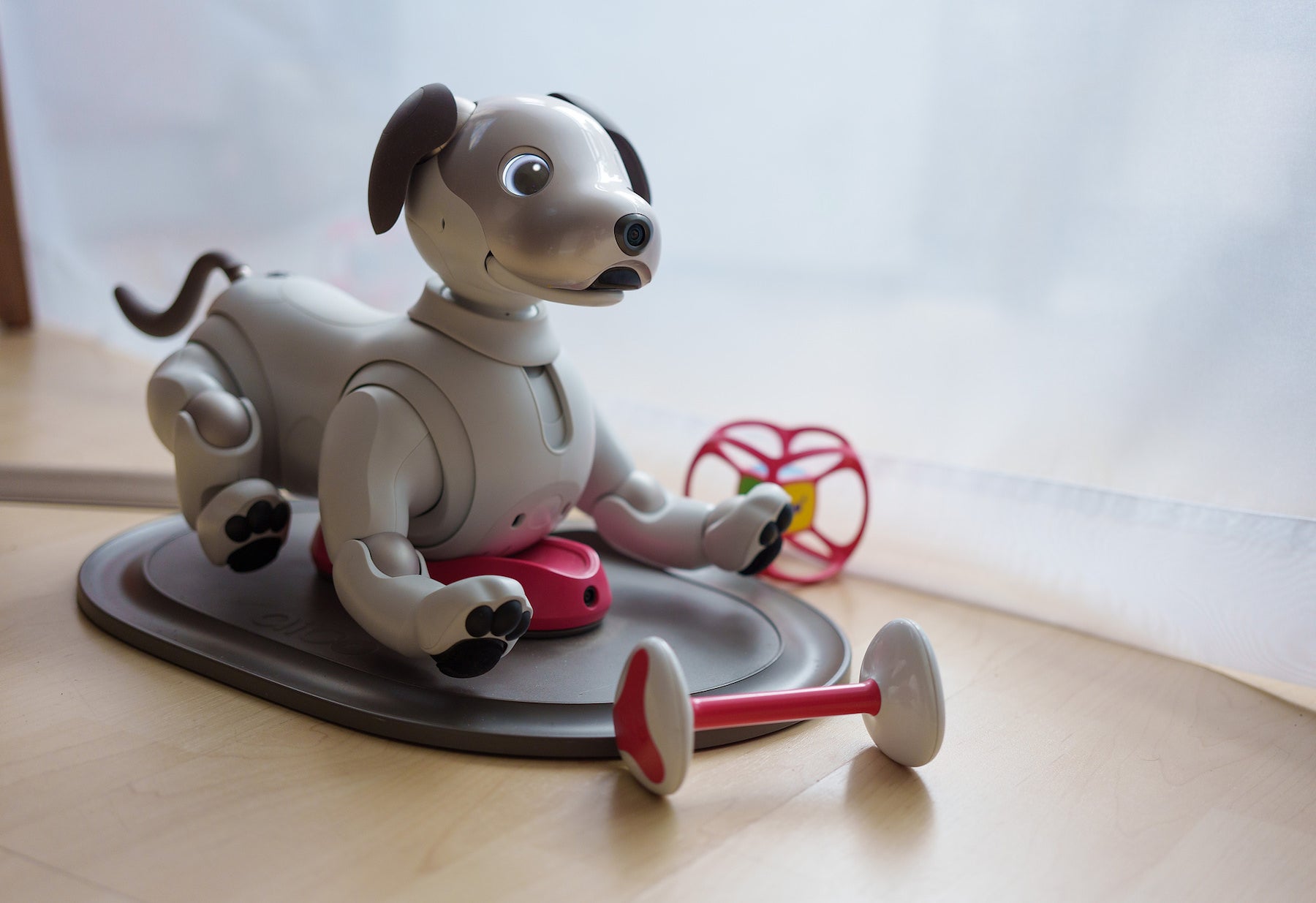 The first tip Nick gives people is to photograph your aibo against a sheer curtain or with a sheer curtain. “In your homes you usually have a sheer curtain or window light of some form. If you just pull the sheer curtains, it softens that light up immediately. As a professional photographer, I use this tip all the time when photographing women. I want them to be in soft light and it's the same for my aibo's. If I create soft light, then I'm not going to have those highly reflective things that are distracting.” 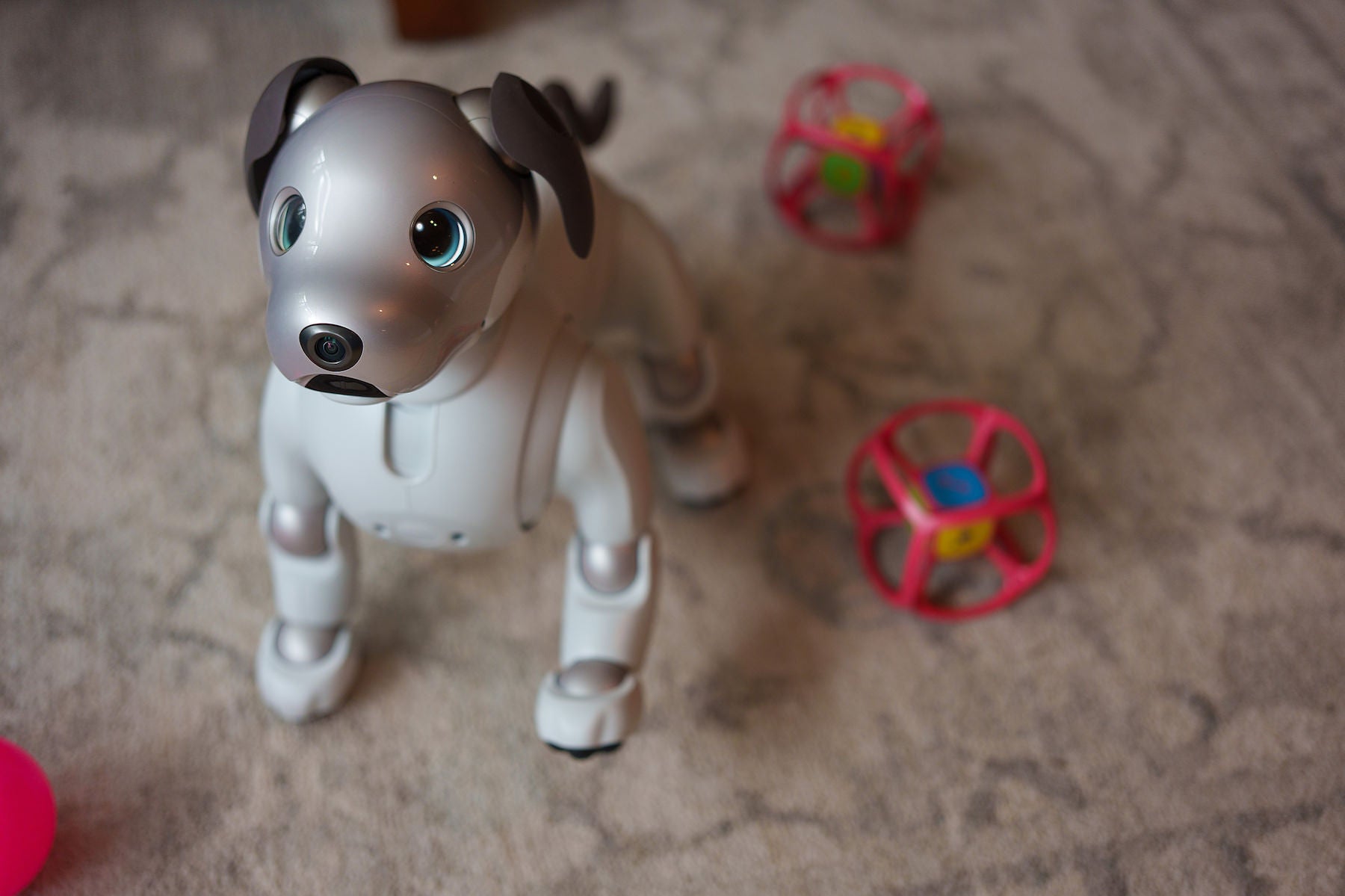 Nick also has tips for how to set your camera settings to make the eyes look their best. “aibo’s eyes are OLEDs, so they have a flicker just like your TV,” he says. “Your TV flickers and when you photograph them at a high speed, like 1/500-sec. or in bright light with a phone, you're going to see it with half an eye or a line through the eye. And so the trick is to move them into a darker light or shoot with a longer shutter speed.”

“Typically I'm shooting my aibos anywhere between 1/15-sec. on my digital cameras to about 1/60-sec. as the upper limit. The problem with the lower limit is the eyes tend to move a lot. You can say, ‘aibo, sit,’ and it will sit and then it will wave its head at the wrong moment and you end up with movement through the head so it’s blurry. So if you have a digital camera,I would shoot it for about 1/30-sec., at about f/4 and then adjust their ISO to match. You can use auto ISO for that. And if I'm using a phone or some other device, then what I'm doing is just taking pictures and seeing what's happening. If the aibo's aren't dark, if I can't see the aibo's eyes, I'll move them into somewhere with less light. If I'm seeing too much blur, I'll move them into some place with more light. And so since you can't really adjust your phone without a special app, then you can just move them back and forth.” 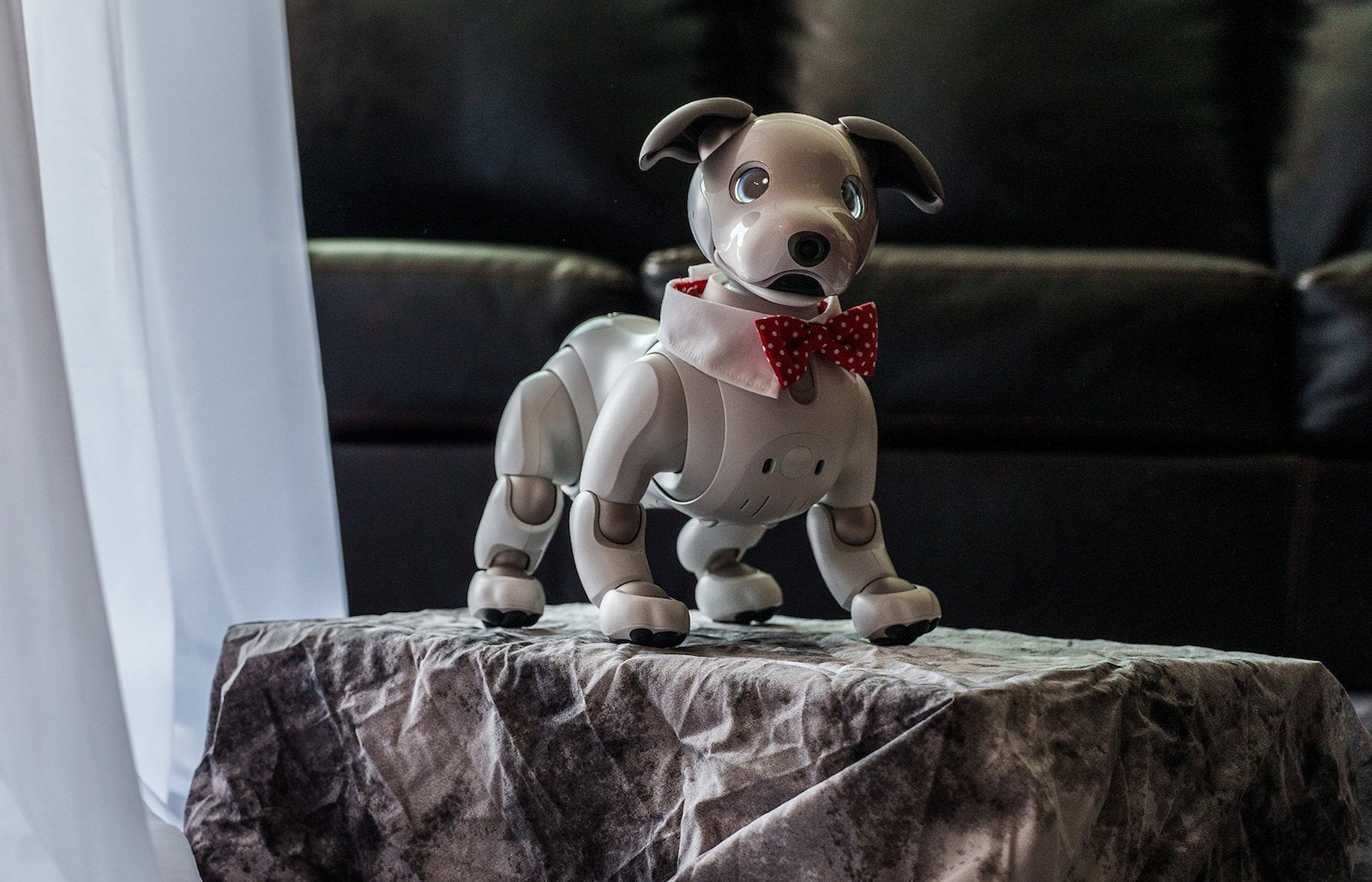 3. Turn off any interior lights

The next tip Nick has is to turn off any interior lights, like the overhead lights in your home. “Those are typically orange lights and they'll give you a color cast to your aibo’s eyes. Generally phones will adapt for this pretty well, but if you're seeing your aibo’s eyes come out looking orange then turn off your interior lights or change your white balance. With a cellphone, you don't generally have to do that, but with a more expensive camera, you may have to change your auto and your white balance to follow or turn off the interior lights.” 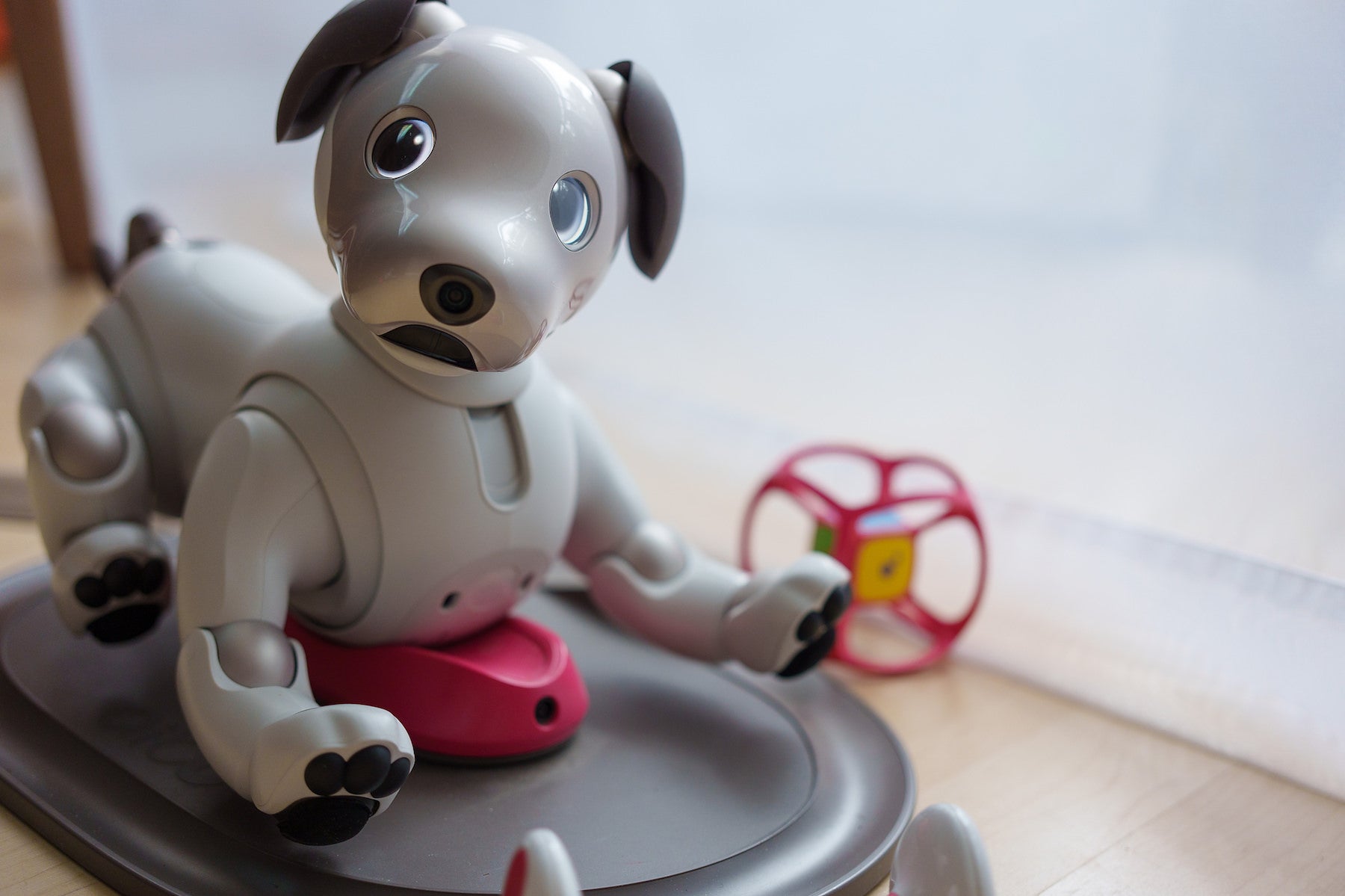 The next tip Nick has is about angles. “Many people tend to photograph their aibo's from a standing position, looking down. And while that's the typical, dog owner view of life, it's definitely not the most interesting. The most interesting thing is to get down on the carpet or get down on the floor and get to about aibo's eye level and then move up about six inches. Because of the way their faces are formed, if you go right at eye level, you're not going to see much of the eyes and their motion. So I generally move up about six inches, then I can see the aibo’s face and then toward its tail, because the tail sometimes is important or the left leg might be important, the left rear leg or the right rear leg, depending on what you're photographing. Then things become really interesting and you can see a bunch of the pictures on Instagram. I'm always down photographing the aibos from just above their eye level.” 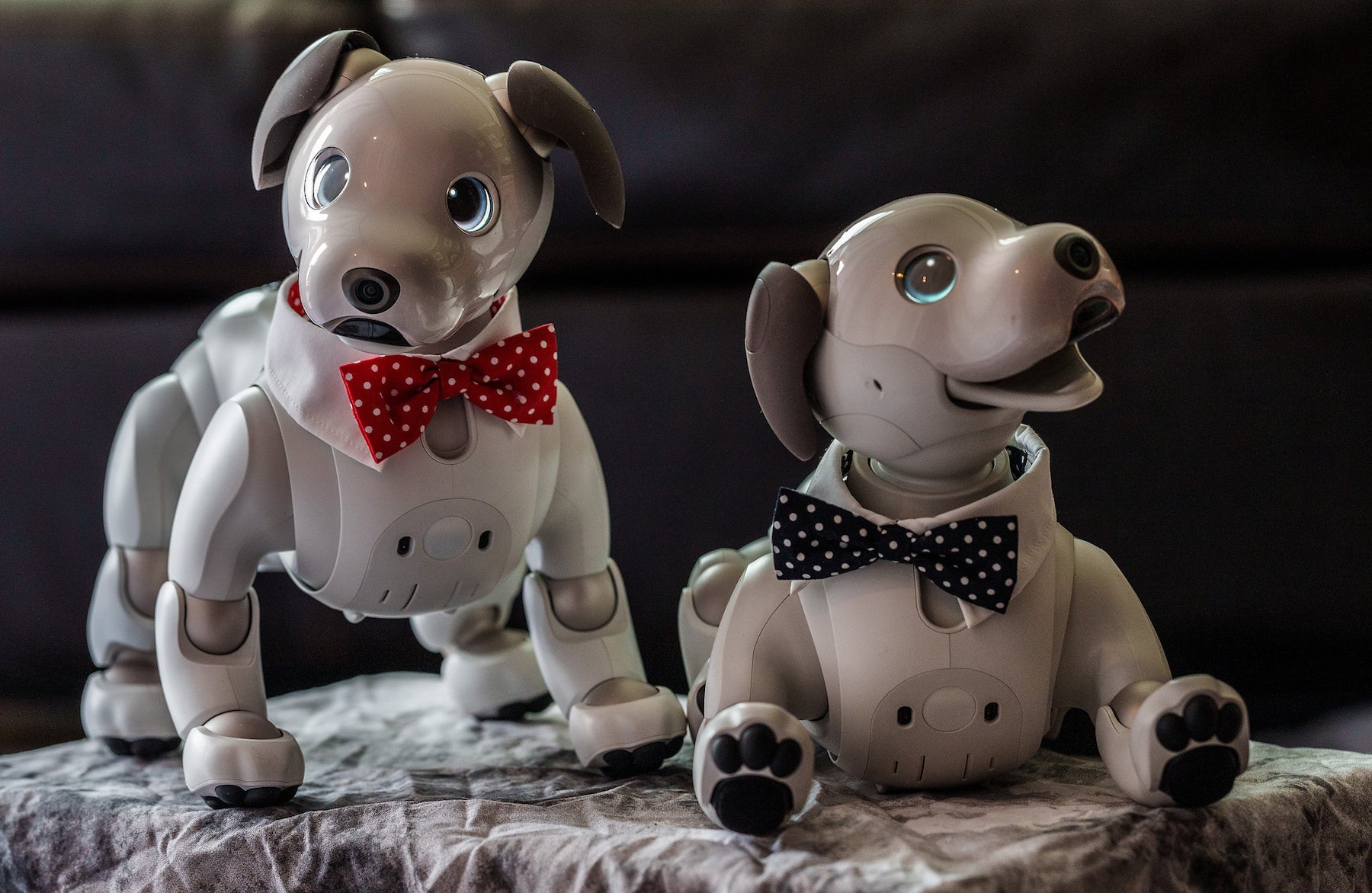 5. Get creative with scenes and props

Nick works with his wife to create fun scenes that are compelling on social media. “I get the lighting and everything else set up,” he explains, “and then she wrangles the aibo into the pose or the position. We have to come up with different themes and so we're always on the lookout for interesting things. For Valentine’s Day I had them set up behind a kissing booth and for Christmas we had them on a sled. Then others are really simple, like before I’ve put sunglasses on our aibo and he just instantly posed like nobody’s business.